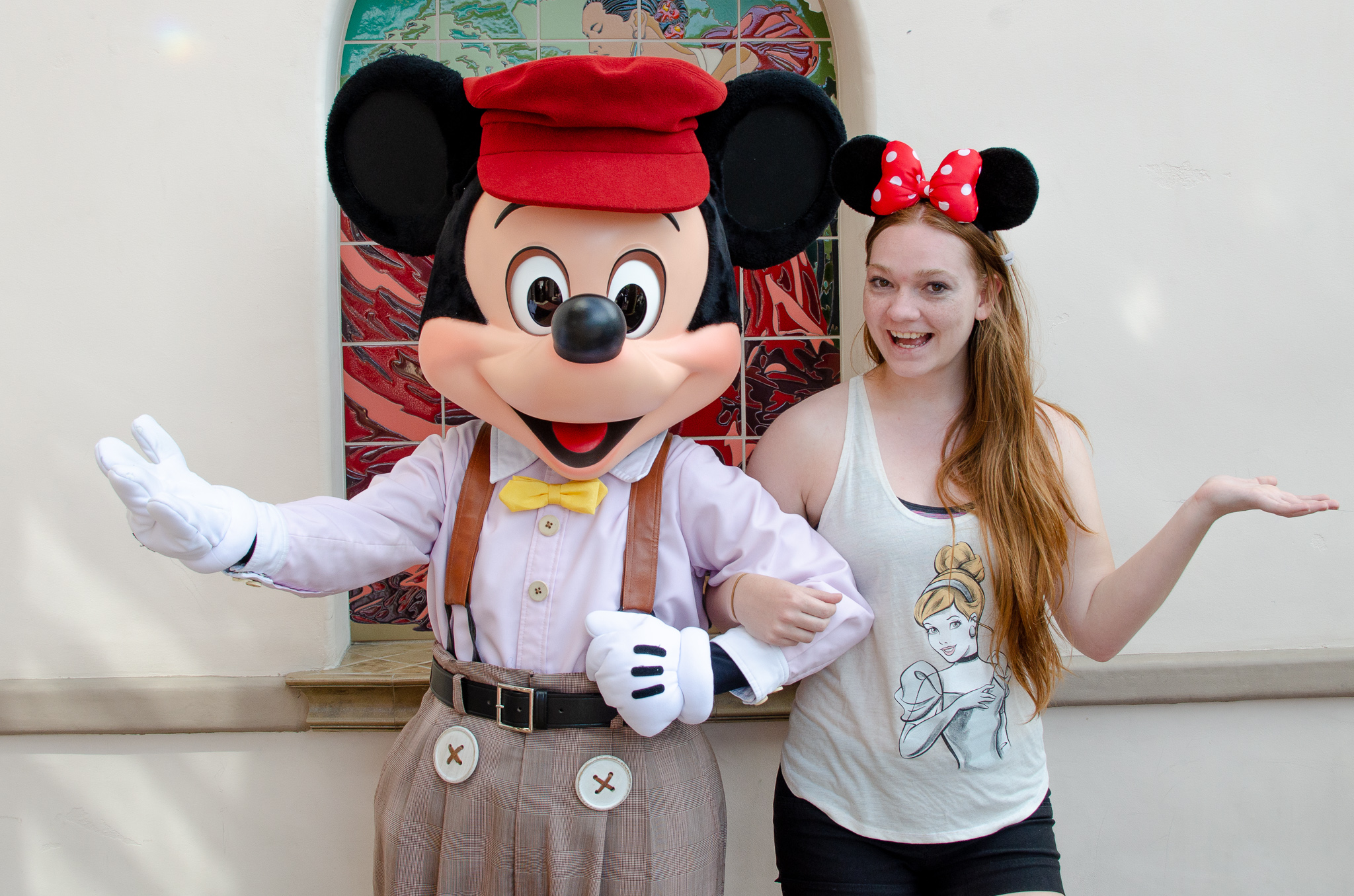 I know I’m not the only crazy adult who still loves Disney. In my opinion they’re one of the most brilliant companies, appealing to almost everyone with their nostalgia, innovation & many acquisitions. A trip to Disneyland in California is a trip down memory lane while simultaneously making new memories. With two parks to explore, traditional and newer characters, and shows and fireworks to amaze there is no lack of things to do.

My sister and I meeting Minnie in her cottage

My experience at Disneyland is more than just a single trip: I’ve been there during every season except Christmas (I spent that season at Florida’s Disney World!)

To read about my Spooky Halloween Experience, check out my post about West Coast Spooky Destinations!

During my visits there, I’ve only ever visited for a day. There is just so much else to explore in the Anaheim/ Orange County/ Los Angeles area!

So what if you only have 1 day at Disneyland? The park and neighboring California Adventure have so much to offer that if you don’t plan ahead you can have an overwhelming time. Finding out what you want to see and do, and then taking breaks during your long day, are key to having the most magical day in the most magical place.

If you’re short on time and only have 1 day at Disneyland, Toon Town may be furthest down on your list of must-see “lands”  (especially if you’re traveling without young kids!) There aren’t any classic rides, and it seems a little bit out of the way. During a busy day you may be tempted to visit it later in the day, only if you have time.

Meeting Goofy at his house in Toon Town

My advice? Be sure not to miss it, and visit it as early as you can! This land opens one hour after the rest of the park, but closes at 8:30 PM in preparation for the fireworks. It is quite small, so it can get crowded fast.

Visiting early ensures you get there before the biggest crowds and get to see the highlight: your favorite classic Disney characters.

My husband and I trying out a car in Toon Town

If you’ve visited Disneyland, you know how integral planning rides can be. There are FastPass options for some, there are apps with wait times posted online, and during special events such as Halloween, there are “themed” rides. A whole day can be spent running from one ride to another.

Character visits are just as important to plan, especially if you only have 1 day at Disneyland.  The locations of some of your favorite characters and the times they will be there are available on the official website!

Visiting Cinderella at the Fantasy Faire

When I was five years old, at Disneyworld, I missed a chance to meet Minnie because she was out “shopping”. When I visited Disneyland the first time as an adult, she still wasn’t home. So when I finally met her on another trip to Disneyland, I felt as though I was meeting a celebrity. All of this could have been avoided had I been more diligent about planning out character visits!

I got a Wilderness Explorer sticker from Russell!

One of the many times I have met Aurora

There is so much to do at Disneyland, and you spend so much of the day in the hot California sun. There are rides to try out, characters to meet, food to eat and little Disney details everywhere.

Eventually you need to take a break. What better way than getting into the shade? One year, while cooling off out of the sun, I found an Iron Man exhibit with variations of Tony Stark’s suits. This was back in 2013, in a building called Innoventions. Today, it is called Star Wars Launch Bay and you can meet characters from the world-famous franchise, as well as pass through exhibits honoring the movies.

The Iron Man exhibit in Tomorrowland

During my time at California Adventure, I found an Instagram worthy wall and a huge air conditioned hall playing clips from classic movies. I loved it so much that when I returned I made sure to take my sister, who loved the nostalgia during a quick refresh just as much as I did.

In my experience, the crowds are usually non-existent indoors. It is a good chance to escape the chaos from outside, as well as the heat. Even in April and October the California sun can be unforgiving and some time spent indoors can be exactly the recharge you need to continue a busy day!

My favorite wall in all of California Adventure

Plan a spot in the shade, for the parade

The daily Soundsational Parade is one of the highlights of a visit to Disney. As magical as the fireworks are, I would argue that the parade is just as enchanting. Floats from your favorite movies filled with your favorite characters cruise down a route that winds through the park. All of this is set to music, with upbeat additional dancers and characters strolling along in front of and behind the floats.

Princess Tiana and Princess And The Frog float

The park offers the parade twice a day, currently at 3:30 PM and 6:00 PM. Where you view the parade from can make or break your experience. If you get a spot straight beneath the sun it can be hard to see the parade. The glare can make it tricky to get good pictures. If you’re all the way at the back you won’t see as much.

Planning for the parade will ensure the best experience. Find a spot in the shade ahead of time and take that opportunity to cool down and take a break. The parade route is posted on the Disneyland website so you can figure out exactly where you would like to be. In my experience, the closer to the beginning you are the busier it is.

Sully from Monsters Inc, in the Pixar Parade

Making time for the parade and planning exactly where to be when it starts is worth your time, especially when you only have 1 day in Disneyland! Also, be on the lookout for any special or newly added parades. When I visited California Adventure (2015) there was a Pixar Parade. It is no longer running, but that doesn’t mean a new one won’t eventually take its place!!!

Skip out on a Park Hopper pass

One of Disney’s cool offerings is the Park Hopper Pass. With it, you can easily move from one park to another. The price difference is around 50 dollars extra to enjoy both of the parks in a day.

1 day at Disneyland is not long enough to enjoy both parks. Out of the times I have been to Disneyland California, only once did I attempt to use a Park Hopper ticket. This was during Halloween time and although it was nice to have access to both parks I was not able to fully enjoy them both. We spent most of the day at Disneyland, leaving only the night-time hours to explore California Adventure.

There are so many details- big and tiny, in each of the parks. To rush through either of them would be missing out on the whole experience. Walking around Disneyland you will find a Snow White fountain, Rapunzel’s tower, and a million little details in “It’s A Small World.” In California Adventure you can enjoy the details put into Cars Land, as well as the experience of waiting in line at the “Guardians of the Galaxy” ride (formerly “Tower of Terror”, as pictured below!)

Hollywood Tower, now replaced by Guardians of the Galaxy ride

Park Hopper is a good option, especially in a huge place like Walt Disney World. If you’re visiting over a number of days, it is worth it to hop between the parks. But with just a day to explore, it is better to stick to one park and immerse yourself in it!

Whether you spend a day or a week at Disneyland, it is always a special experience. Each time I have been I have done something new and exciting.

Not sure what time of year is the best time to visit? This calendar from Victoria at Disneytrippers can help!

After four visits I still haven’t been on all the rides. If you only have one day to explore the parks, make sure you plan in order to make the best out of your time at the most magical place on Earth.

18 Comments on “1 Day At Disneyland: Tips for the Most Magical Day”