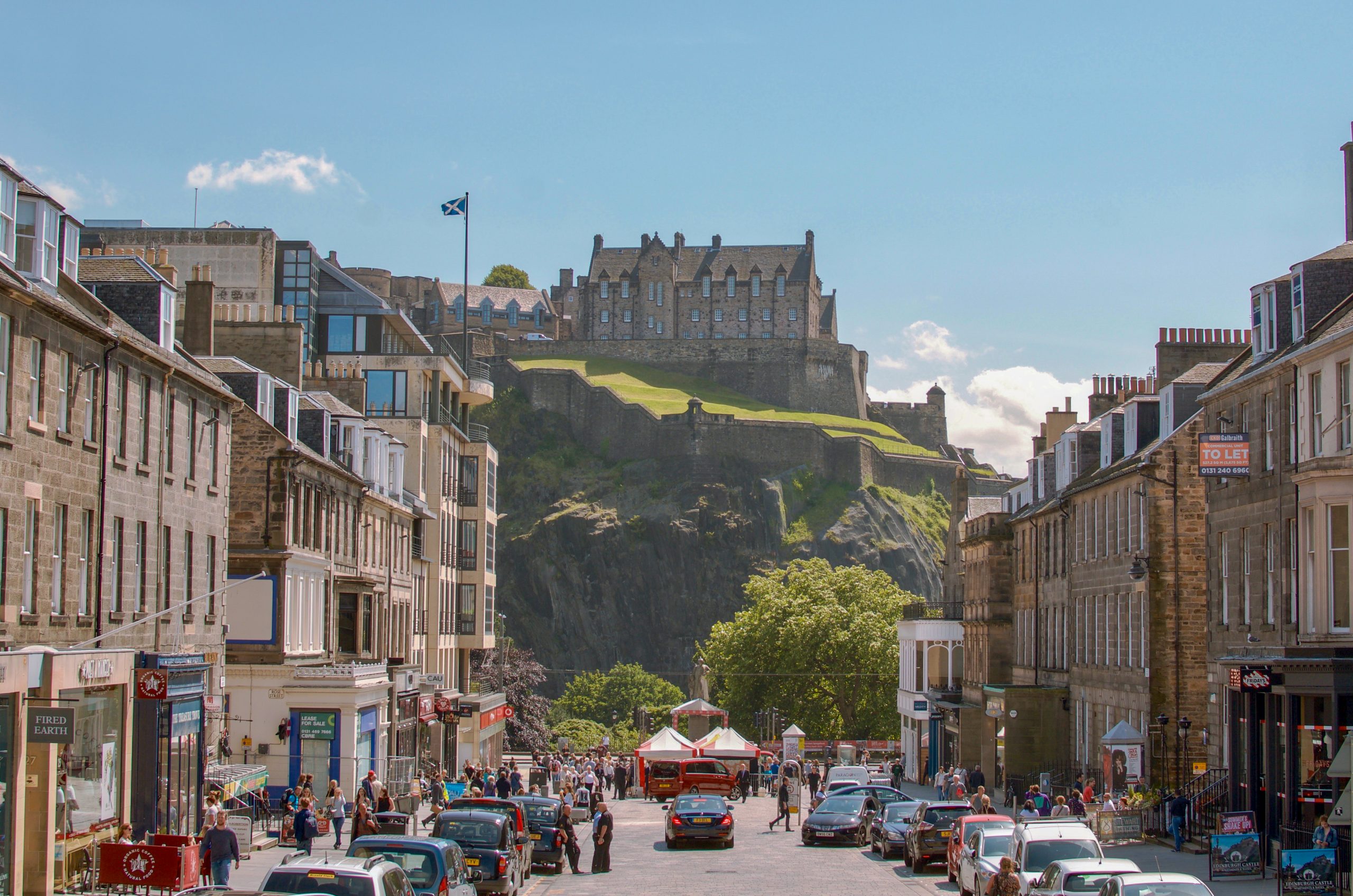 Edinburgh. Oh, Edinburgh. The magical first city, the city that still feels like a dream.

Let me preface this post with a few important details. We caught a flight the day after our wedding, still floating somewhere between a hangover and newlywed bliss.  It was a red-eye from Toronto to Edinburgh, and we decided to use the flight to sleep and to jump right into exploring the city as soon as we landed. We would only have 1 day in Edinburgh. The airport, like in many cities, is in a suburb and therefore we would have to master the art of driving on the opposite side of the road to get there, and then navigate a busy city filled with roundabouts and completely different left turns. We had it all planned out in our minds that we would drive to Glasgow that evening. Tiring, but manageable.

Of course, it was completely different than what we had imagined.

Want a more detailed itinerary? Check out my UK In 4 Days Itinerary to give you details of everywhere we went in Edinburgh!

Looking back on it, we learned four very important lessons that day that would set the tone for the rest of the trip, even if we sometimes lost sight of them.

After finally drifting off to sleep on the plane, I was awoken by the man sitting next to us. He apologetically handed me back my purse. I thought maybe I had dropped it, and it was not until I finally woke up out of my over-exhausted stupor that I realized my purse smelled strange. It registered very quickly that his daughter, who had been sick all flight, had puked on it. It took some serious scrubbing in the tiny airplane bathroom to get the smell out. After hauling all of our belongings and our sleep-deprived selves to an empty area on the plane, we tried to settle back in for the last few hours of the flight. Unfortunately that did not happen, and that was the end of sleep for me on that flight.

If you remember back to my introduction, sleep was crucial on this flight. I was already exhausted from everything involved in putting together and attending my own wedding. No one is to blame, but it was an unfortunate thing to happen. I realized then that sometimes unfortunate things just happen, completely out of your control. So you roll with it.

We landed, got breakfast, and spent all of the aforementioned time absolutely in awe at people speaking in their Scottish accents. Next up was the rental car area. I do not believe we thought any of this through. In Britain they drive on the opposite side of the road, but had either of us read up on that or thought about what that meant for us? Not at all! We were offered an upgrade from a basic to a more luxurious car, and because I was exhausted and enamoured with the salesman’s Scottish accent, I pestered Adrian, trying to convince him that we needed the upgrade, until he finally gave in.

Driving into the city was probably one of the scariest things we did that trip. My upgrade came in handy because it was a completely brand new car, and had motion sensors and a wonderfully loud beep to tell us when we were veering out of the lane. Because of that whole experience, I made sure we knew the risks and facts concerning all future decisions.

Read the story behind the famous dog here

We didn’t get a chance to go in, but the pub has great reviews!

The rest of the day went by in an exhausting flash. The sun (which is super rare in that part of the globe), the crowds, the excitement, and the fatigue all came together to fuel a magnificent moment. On our tour bus back to the main station I was barely keeping my eyes open. I do not think I have ever had the feeling that if I did not sleep I would die. Literally die. My brain and organs and everything vital felt like it was going to shut down. I convinced Adrian I needed to be out of the sun and trekked up to the very front of the tour bus. There I proceeded to shamelessly sleep right in front of the live tour guide as he gave his tour. Sorry, tour guide.

It seems as if Adrian was not immune to the exhaustion either. He tapped out in the middle of the our drive to Glasgow. We pulled into a random gas station parking lot and slept in broad daylight for a few hours, while I’m sure all sorts of truckers wondered what the heck was going on. It was a glorious mess.

It seems obvious that one should sleep before doing as much as we did in that day. I know it does. We know that now. It does not mean we recognized it at the time, or applied it to the rest of the trip.

Bagpiper outside of Edinburgh Castle, playing Scotland The Brave

Find the beauty in it all

Despite all the mishaps mentioned above, it was a beautiful day. My family is from Scotland, and my childhood stories of Greyfriars Bobby and Rabbie Burns came alive. I teared up as we entered the city. And again while watching a bagpiper play the quintessential bagpiper song “Scotland The Brave”. I got to witness someone else (Adrian) trying a tea cake for the first time (if you don’t know what that is you need to Google it and then find one to try), and I got to laugh at stores with punny names like “Thistle Do Nicely.”

In pictures our day looks beautiful, and it really was. Beautiful, but like everything else in life, filled with bumps along the way, mistakes and hilarious moments. Beautiful, truthful travel.