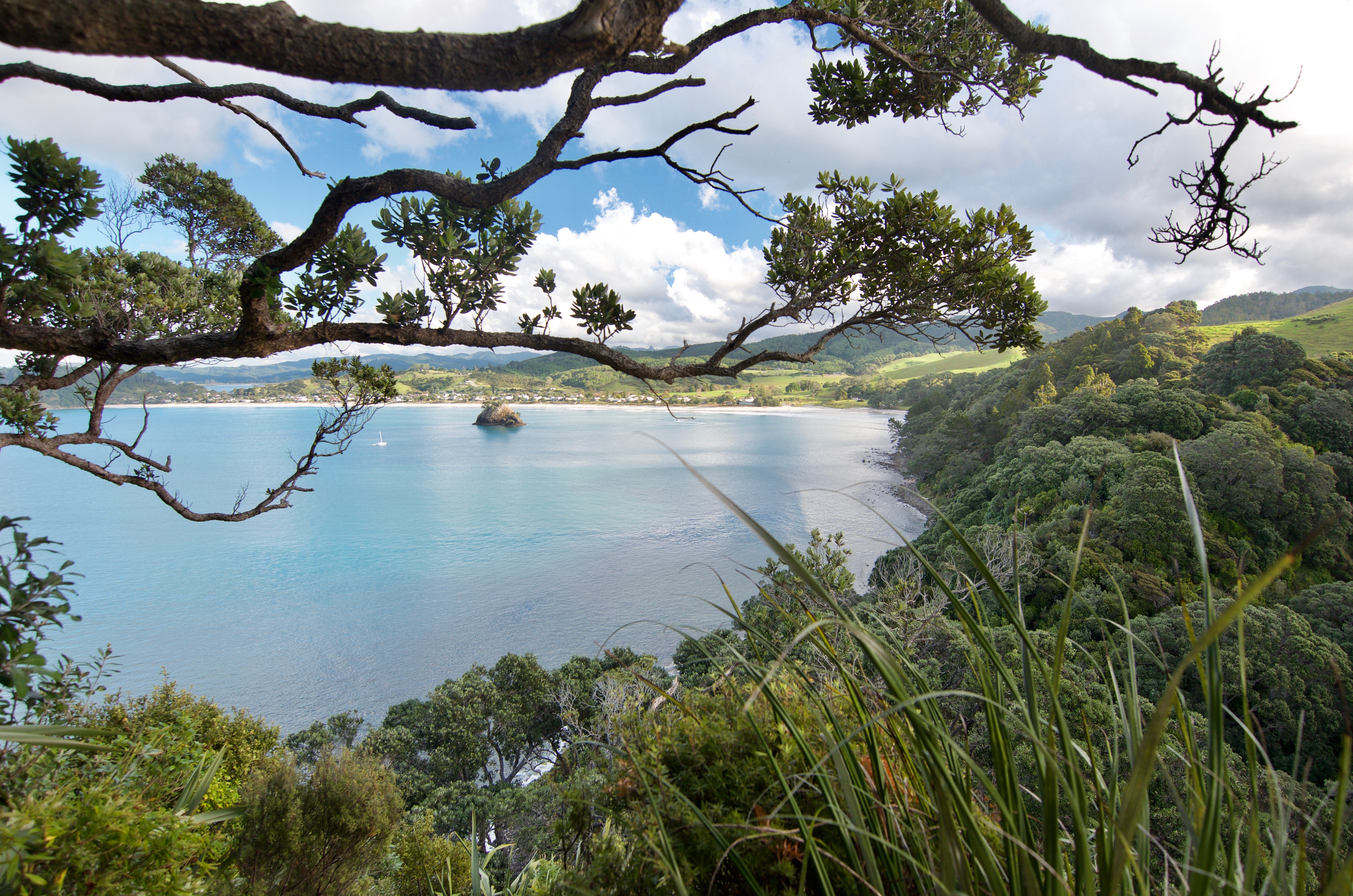 New Zealand is a special place. It was clear from the beginning of our camper van adventure that this would be a place unlike any other we had seen before. On our first day we fell dramatically behind schedule. We stopped every ten minutes to take in yet another insane view. This became commonplace on the trip, stopping for viewpoints, for sunsets, and once for a hike to a cave where (to our surprise) we found glow worms. The grass is greener in New Zealand, the water is more clear and clean than anything I’ve ever seen, and towns are few and far between.

We visited New Zealand North Island. It is known for its geothermal activity, its rolling hills and sheep, and its warmer temperatures. Although not nearly as dramatic as the South Island, it has a lot to offer.

The Pacific Ring of Fire runs through the North Island, creating the vast Taupo Volcanic Zone. This allows not only for an up close and personal experience with active volcanoes, but also a chance to experience geothermal areas. Geysers, hot springs, and vents are scattered all the way from White Island out at sea to the middle of the island’s interior. The North Island is home to Hobbiton, the filming location of The Shire in the Lord of the Rings as well as in The Hobbit trilogy. Filming locations from the movies can be found all throughout the island. And the coast is glorious, dotted with islands, rock formations, and ever changing water colors.

Hobbiton almost made the list, except that it poured rain and we had the worst tour guide ever!

Although it was all beautiful, everyone has their favorites. Here are my 5 Amazing Places from New Zealand North Island!

This is where we started our trip, and we chose a great introduction to the island. While driving out to New Chums Beach we encountered rolling hills and ice blue water.

The beach itself, voted one of the world’s top 10 beaches, was stunning. It was empty and the water was beautiful. We spent our second day on the Coromandel Peninsula navigating beaches and crowds. It was Easter weekend, and it seemed as though everyone in New Zealand had chosen the Coromandel Peninsula as their vacation spot. Visiting Cathedral Cove was disappointing, but the area redeemed itself when we found Stingray Bay. It was quiet, the sand was soft and the water a beautiful blue.

The Coromandel Peninsula has so much to offer: you can hang out on the beach (a lot of which require a bit of hiking to get to), you can take boat tours and you can snorkel. Stingray Bay is aptly named because there are frequently rays there. The rock formations off the coast are unbelievably huge, and the scenery changes at each and every single beach.

*Note: On December 8th, 2019 an eruption on White Island happened. Tourists on the island at the time were badly injured, or are now deceased. My thoughts are with the families of everyone involved, the town of Whakatane and first responders. Looking back, I was not completely aware of the risk I was taking on this tour. It is still one of the most amazing things I have done, but it is important to remember how unpredictable geothermal features can be.

I did not know quite what to expect out of White Island. I was not the one to plan it, and all I knew was that we were taking a boat to a volcanic island. It turns out it was a live volcano, and one of the coolest things we did on the trip.

White Island is one of those places that is truly unlike anything else you have seen. Sure, I have been to Yellowstone and witnessed volcanic features, but this seemed much wilder. From our approach the island was barren except for the very edges which were covered in green vegetation, and the water was a blue I have never seen. It was insane.

Touring the active volcano itself was so cool. We walked around with hard hats and gas masks while our guides told us the history of the island and the geothermal features we were walking on and around. There were no boardwalks, just us and nature. To top it all off, on our boat ride home, we encountered an extremely large pod of common dolphins who swam with the boat for what seemed like forever.

You can find out more information about our time in the Taupo Volcanic Zone!

After a few slower days, and one very disappointing one in which our Tongariro Alpine Crossing was canceled, we took a caving tour. Instantly New Zealand redeemed itself! Although I had apprehensions about this intense tour, it was one of the coolest things we did.

New Zealand is the sole home to glow worms, which are actually maggots who dwell in caves and shine to attract food (but that does not advertise well, hence the name glow worm). After rappelling 27 m into the cave, we spent the next few hours viewing the glow worms in complete darkness, while floating down river in tubes. We saw eels (small and large), caught glimpses of the glow worms up close, and climbed through tiny crevices.

The glow worms we discovered ourselves

After our tour we decided to do a hike in the area, which led us to our own glow worms. Although they were not as abundant as they had been within the tubing caves, it was still so cool to happen upon them on our own.

This was one of our last stops on our camper van adventure. Again, it was a boat ride, in which we would tour all day around Northland’s Bay of Islands, which constitute 140 islands off the coast.

Northland has so much more to see than just Bay of Islands. Check out all the cool places we went!

We traced the steps of a historic route that delivered cream to the islands, and saw Black Rocks (which somewhat resemble the rocks of Giant’s Causeway in Ireland), got up close and personal with the famous Hole In The Rock, hiked to the top of one of the islands for an amazing vantage point, and saw a pod of bottlenose dolphins as well as a long blue penguin.

Hike to the top of an island, overlooking Bay of Islands

The highlight of this trip was that we opted in to swim with dolphins if conditions were right, and boy oh boy were they right.

*NOTE: You can no longer swim with dolphins in the Bay of Islands, as of June 2019. The population was in decline and so they are being given more space and room to be dolphins!

Somewhere in the deep open ocean we spotted three dolphins. As soon as we were given the okay and left the boat’s net, I looked down through my mask and saw all three dolphins swimming below me, super fast. I don’t think I will ever forget that moment. It was just us, the dolphins, and the ocean. It was their choice to be there and they could have left it they wanted. But they were interested in us and played with the group for awhile before leaving. The adrenaline from that experience lasted for hours!

Our last stop before heading home was Auckland. The city was a pleasant surprise. We stayed in the CBD, close to the harbor, and found that the area was beautiful. The old buildings, the decorated streets and storefronts, it was all beautiful.

We took a Hop On Hop Off tour the next day, which took us all around the main part of the city. We spent some quality time at Kelly Tarlton’s Sea Life Aquarium, where we saw Antarctic penguins up close and personal. The Parnell Rose Gardens were beautiful, with too many varieties to count. And although it made us quite sick afterwards due to the amount of sugar, Giapo ice cream was an experience.

Auckland was the perfect ending to our trip: it was a slow paced day in which we were really able to take in and enjoy the sights around us.

New Zealand North Island had a lot to offer. Many things did not turn out as we had expected: some things took longer, some things were cancelled, and some things were better than we could have imagined. It was an adventure that is for sure, and one I will not soon forget.

Night sky Thanks to Alyssa & Adrian for setting up the camera for this shot!

I cannot wait to share more of this beautiful country with you!