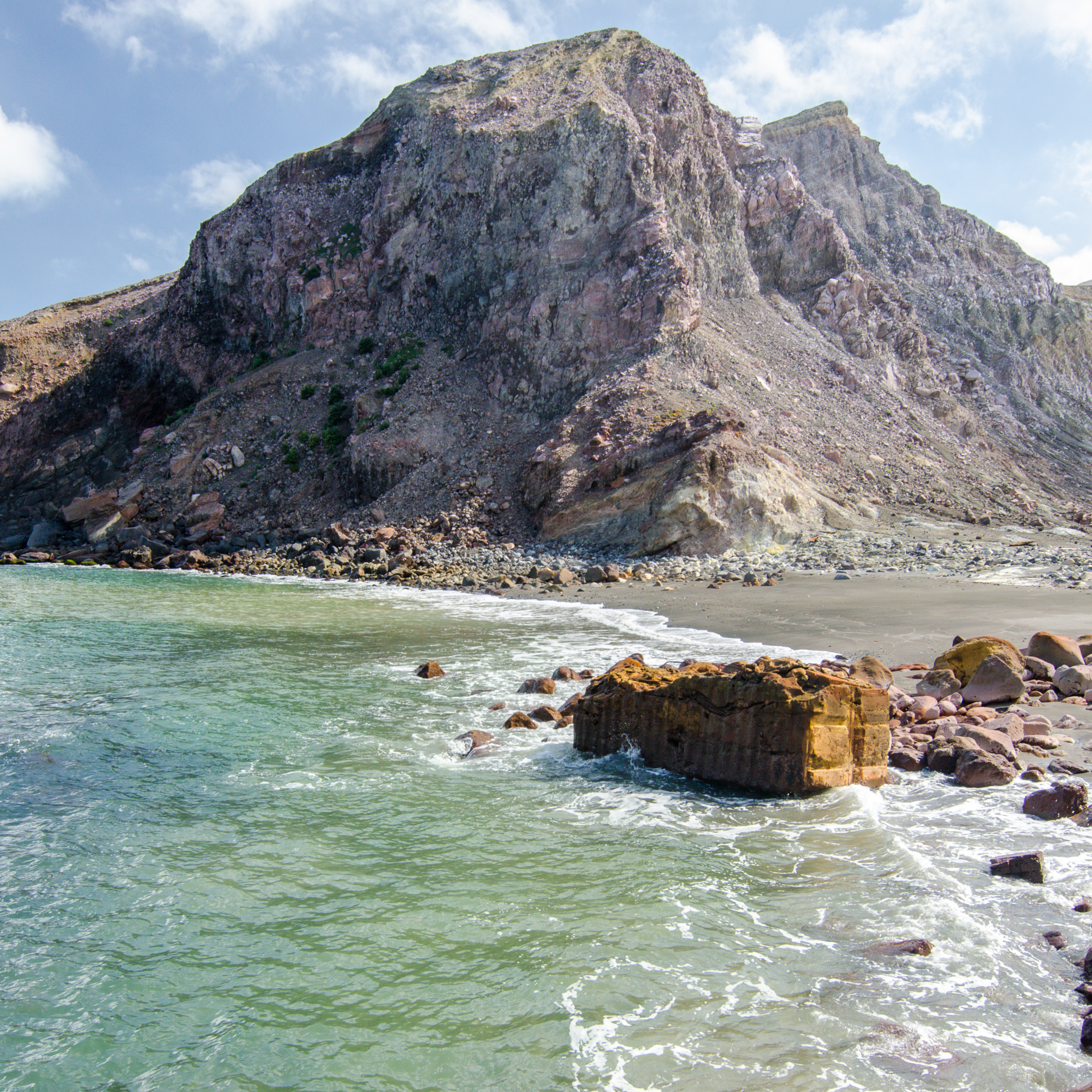 A live volcano, New Zealand’s largest lake, and geothermal springs. That is just a snippet of what was to come as we continued our North Island, New Zealand road trip.

After an interesting start in The Coromandel, we continued down the coast. Our first stop would be Mt. Maunganui, to climb the lava dome looking out over the town and the sea. This was the start of our venture into the Taupo Volcanic Zone. A chain of volcanoes that extends from offshore of the island into the heart of Rotorua, it is an active area.

Volcanoes and geothermal features are unpredictable, and so are travel plans. In the next few days we faced a fast paced schedule and a huge change in plans. New Zealand sure was doling out those truthful travel lessons!

Some travel days contain surprises (both good and bad)

We woke up on our third day, not particularly wanting to roll out of our cozy camper van to climb a mountain before sunrise. The time change (the clocks went forward the day we got to New Zealand!) made us four hours ahead of Brisbane time, and we were still recovering. So we skipped out on the hike, and caught some extra sleep.

*Note: On December 8th, 2019 an eruption on White Island happened. Tourists on the island at the time were badly injured, or are now deceased. My thoughts are with the families of everyone involved, the town of Whakatane and first responders. Looking back, I was not completely aware of the risk I was taking on this tour. It is still one of the most amazing things I have done, but it is important to remember how unpredictable geothermal features can be.

The main event of the day was a trip to White Island. The island is a marine volcano about 50 km off the coast, and is only accessible by tour. You can catch a helicopter there, or take a boat. We chose the cheaper option of a boat ride with White Island Tours. What an experience! The island is an active volcano, and you must wear hard hats and have gas masks. While touring the island, there are no boardwalks, and there is no quick escape. And it’s not as if it’s not very active: the landscape is constantly changing and its last eruption was in 2017. We saw steaming vents as well as pressure mounds. We stood in front of an ever changing lake located in a crater. The tour ended by walking around the remnants of a doomed sulphur factory where all workers were killed in 1914.

Another boat ride we took during our time in New Zealand was a cruise through the Bay of Islands, in Northland

I had no idea what to expect from this trip, and it was a pleasant surprise. On our boat ride back common dolphins tagged along with the boat, and it seemed like we had just had our first completely successful day in New Zealand. Except we still had the drive to Lake Taupo to go.

We left the boat’s port town, Bay of Plenty, mid afternoon. We followed our GPS dutifully, even when the roads started turning into dirt. Even when the potholes became so numerous that we were essentially driving through an obstacle course. After finally cluing in that we were lost, we retraced our steps until we found some reception for new directions.  We did not arrive in Taupo until late that night. Day three was a day with many surprises, both good and bad!

Compared to the previous days of our North Island, New Zealand road trip, our day in Lake Taupo was relaxing. Our sole plan was to catch a sailing tour of the lake, because we knew that the next day we had our long and strenuous hike. The Tongariro Alpine Crossing is one of North Island’s most famous treks, and we wanted to be completely ready for it.

We set sails with Sail Barbary on a gloomy and cold morning. Hot chocolate provided warmth, and for the first time on the trip we had nowhere to be, except for exactly right where we were. We slowly sailed across the lake, listening to music as we went. Our main destination was the infamous Maori Rock Carvings. These are carvings located 14 metres above the water in Mine Bay. Although created recently, in 1972, this carvings are a beautiful sight to see. We headed back to shore with dreams of owning a sailboat and excited for the next day’s hike.

We soon lost that excitement. Half an hour after setting foot back on land, it was clear that Adrian was having a severe, delayed form of sea sickness. As he struggled through a nauseous afternoon in town, we got an email. Because of the inclement weather, our hike the next day was cancelled. After calling the company and accepting defeat, we scrambled to make accommodations closer to town. We spent that evening at a holiday park that resembled a Caribbean resort, drowning our sorrows in the huge heated lagoon and eating donuts from the swim up bar.

Soaking in geothermal pools is healing

With no hike to complete,there was nowhere to be the next day. After starting to feel quite sick, I spent the morning at a doctor’s office. Then we aimlessly walked around town. We had a long lunch, spent time on the shores of Lake Taupo and talked about how cool our hike could have been. It was clear that this was a huge blow, and no one was taking it particularly well.

We had previously made reservations to spend the night recovering from the hike at an actual hotel, in an actual room. It was a welcome change from sleeping four people in one tiny camper van. The best part was that we booked that specific hotel from its proximity to Wairakei Thermal Terraces. This park was two-fold: a geothermal area that you could walk around, and pools you could swim in that were fed by the heated water.

Although we weren’t soaking muscles sore from a long hike, the pools were a perfect cure for our sadness. The silica terraces flowed from one pool to another, leaving unexpected hot spots. The waters contain a mixture of minerals that left our skin feeling soft, and soaking in them left our minds more at ease. While I cannot claim that I was able to reach Mordor (fun fact: Tongariro is the filming location!), I will claim that soaking in geothermal pools is healing!

Approaching White Island from the boat

Our introduction to the Taupo Volcanic Zone was a little different than expected. Although there were so many unique experiences, we also got lost and our days looked different than we had planned them. We would continue making our way through the geothermal part of the island on our North Island, New Zealand road trip.  There was a lot of adventure coming up, in the form of glow worms and hobbits!

Read about my time spent traveling from Rotorua to Waitomo

Check out my post of my favorite places on New Zealand’s North Island  for a sneak peek of what’s to come!