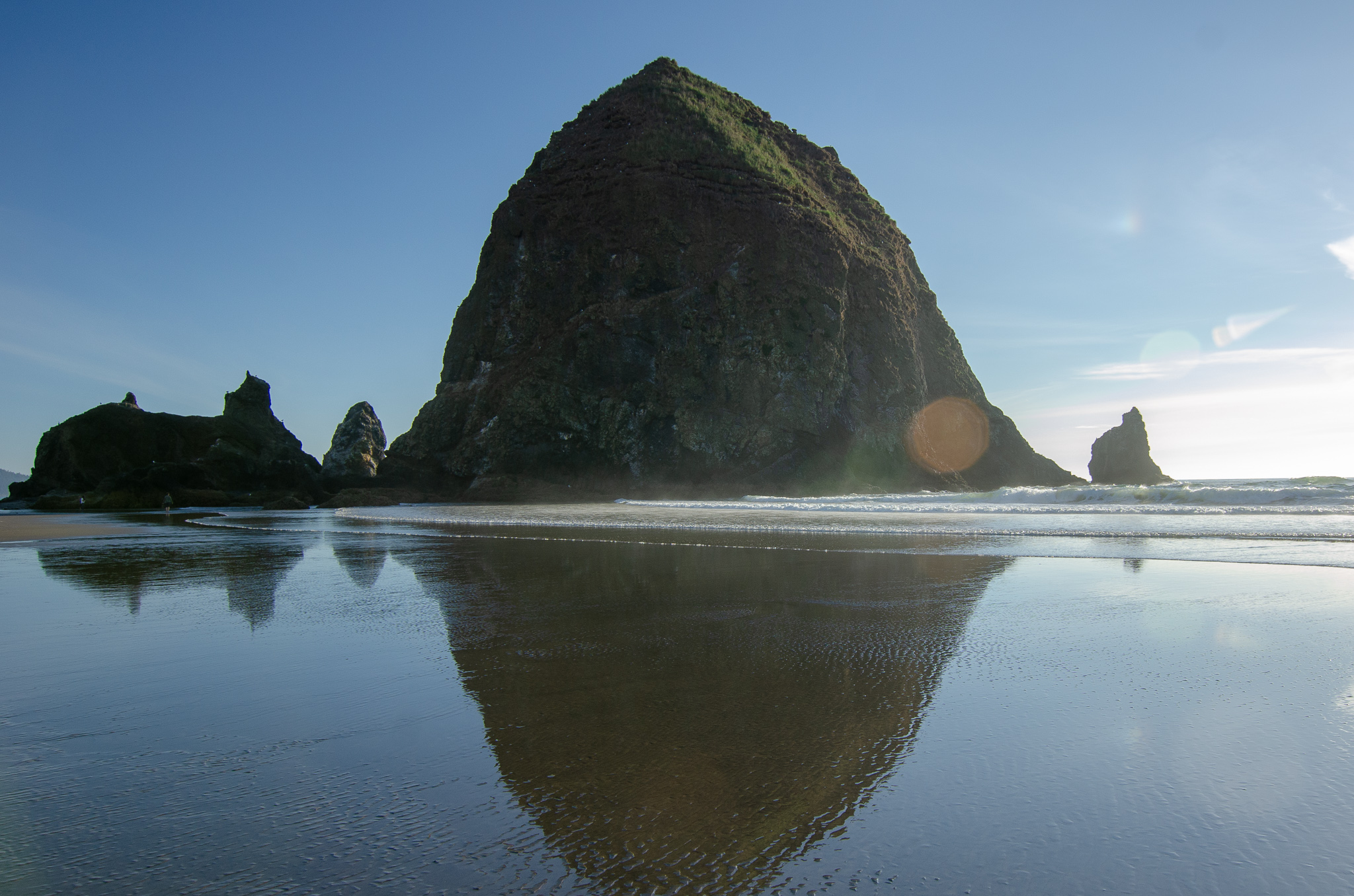 *If you sign up for Airbnb using my referral link you will get you will get a $40 USD credit for your first trip of $75 USD or more!

The road trip is the quintessential American vacation, as referenced in this previous post. Over the years our little family has mastered the art of road tripping: we have learned to drive long hours, become pro Google Maps navigators, keep two active dogs happy in the back seat (well, at least one of them…) and leave room for unexpected adventure.

Just as I finally felt we had become road trip experts, a big change occurred. And turned the whole game on its head.

Road tripping while pregnant is a whole different ball game. Accommodations must be made, and plans may change more often than usual. But road trips are as doable for pregnant women as any other form of travel (especially in the second trimester!) My recent Oregon Coast road trip was not only enjoyable, the slower pace made me appreciate it even more than usual!

This was by far the day with the most driving. We set out around lunch time, with three people and two dogs in our Subaru. Since we were trying to get from a big city out to the coast, the drive just to get to our first stop took 3 hours itself (with some stops).  We had the calm beach all to ourselves at Cape Disappointment (read about the history of the name here), and an unusually sunny day on the coast. After enjoying the solitude of the ocean we headed to Astoria, a cute town on the Columbia River, which separates the states of Washington and Oregon. The highlight of the town was spending sunset watching the resident sea lions on the docks. We ended off our day by grabbing dinner at Fort George Brewery & Public House, where I was served the largest portion of vegetarian chili fries I have ever seen. From there the drive to our Airbnb took another two hours.

This is a picture of the sea lions on another trip we took to Astoria, since it was already dark when we saw them this time!

They have tried many creative ways to get the sea lions off the docks: read some here

If you have been experiencing morning sickness (really, it’s all day sickness for a lot of women) be prepared that you may need to puke while in the car. I have puked while trying to eat bananas in the car, and on another road trip this pregnancy I puked my breakfast up three times before I could keep it down. After awhile, it becomes shameless and routine. On this particular day, for seemingly no reason at all, I needed to vomit. I became acquainted with a Subway bathroom very well. Keep a bag handy in the car at all times, and do not be ashamed if you need to find a fast food chain or a gas station or the side of a road. Whatever makes you feel better!

The sun setting on the docks in Astoria

Day Two started with breakfast in nearby Lincoln City, at Corner Cafe. They have standard breakfast options, and the portions are quite large. From there we headed to a secret entrance around Siletz Bay Beach, that is usually empty and gives the dogs lots of room to run around. We had finally made it to the Oregon Coast! After tiring the dogs out, we continued our journey back up North.

We stopped at a beach we had never been to: Hug Point State Recreation Area. I can confidently say that it tops the list of my favorite beaches along the Oregon Coast. Although there were quite a few people, the beach is so long that you can escape them pretty easily. The water here was the clearest I have seen in Oregon, and the sand was so golden. We caught sunset at Cannon Beach, Oregon’s most famous beach. The huge haystack just off shore attracts over 400,000 people each year. If you happen to go during low tide there are interpretive guides that can help you explore the Marine Gardens surrounding the rock.

Officially 16 weeks on this day!

Our day finished at Pelican Brewing, which was a new restaurant for us although we have been to Cannon Beach many times. The food was amazing! I had their clam chowder and a house salad, and it was one of my favorite meals of the trip!

Unexpected waterworks can happen at any time. I woke up the morning of our second day, after a rough night of interrupted sleep, and was feeling very emotional. By breakfast I was full on crying (yes, in the restaurant), and the tears would not cease until we had left our first beach. It does take a lot out of you emotionally. Worry about making yourself feel better, and try to help others understand that this is a passing emotion, thanks to hormones. By mid day, after a nap in the car, I was back to myself!

Haystack Rock in all its glory, with absolutely no one in this shot (so rare it has never happened to me!)

Olive made a friend on the beach!

After a quick breakfast at our Airbnb, we finally visited the beach three blocks away from us- Gleneden Beach! We have very high energy dogs, so we like to take them somewhere first thing in the morning where they can run out some of their energy.

Although we could not get any pictures of the whales because they were so far away, we did see many!

From here we headed South. After passing Depoe Bay, also known as the whale watching capital of the Oregon Coast, we were convinced we could see plumes of mist coming out of the water. We pulled off the highway at the nearest exit and found ourselves at Cape Foulweather. Another unfortunate name, another gem of a place on the Oregon Coast. Here we watched countless whales breaching and sending plumes of mist into the air. It was almost surreal, they looked so small from the high cliff we watched them from.

Onwards to Cape Perpetua Scenic Area, we stopped at the same tide pools in which I found my first ever starfish! Unfortunately we only saw one lone starfish, and it was too near to the crashing ocean to venture closer. We reached Neptune State Scenic Viewpoint and I had one goal in mind: find starfish! After a disappointing start to my search, I found my first few on an unassuming rock. Fueled by the adrenaline thanks to this find, I ventured to the other end of the beach. And found countless starfish, and the most amazing tide pool life at every turn!!!

There was so much marine life in these tide pools!

After we had our fill of tide pool finds, we headed back up the Oregon coast, and stopped in at Luna Sea Fish House for a late lunch. If you want fresh fish, I would recommend visiting here. The waitress was very well versed with exactly what fish we were being served, where it was caught, and what is native to the area! I was able to have the fish tacos because I knew exactly what fish was in them- pregnancy safe varieties!

We ended the day earlier than the previous few, and had a quiet home made dinner in our Airbnb cabin.

Plan to do much less than you normally would on a road trip. You get tired much easier, especially when you are spending a lot of the day walking and being outside. We originally planned to drive all the way down to the Southern end of the Oregon Coast on this day, but sacrificed seeing more for being able to truly enjoy what we did see, and having a shorter day.

We packed up and left the Airbnb on a drizzly morning, and after catching some really big waves at Gleneden Beach thanks to the stormy weather, we headed inland towards Portland. Goodbye Oregon Coast! We stopped at the Evergreen Aviation and Space Museum, which was of more interest to Adrian, so I stayed in the car with the dogs while he explored for about an hour.

Portland’s most famous donuts (the line can be hours long!)

We made it to Portland in time for dinner, and stopped at our favorite Portland restaurant: La Petite Provence. It is a French bakery/ restaurant with multiple locations, and serves the most amazing brunch and small plates for dinner. The French Onion Soup is a must! After dinner we walked along the riverfront in Portland, and after four years of disappointingly long lines I finally got a Voodoo donut! To get an idea of what the donut place is all about, their tag line is: The Magic Is In The Hole. We checked into our new Airbnb and called it an early night!

On our last day we woke up later as the third member of our group went on an early morning fishing expedition. Our last stop was the area that separates the states of Washington and Oregon: The Columbia Gorge. We visited as much of the Columbia Gorge as we could (some of the area remains closed due to a huge wildfire that spread through it in 2017), and started our three hour trek back to Seattle.

Looking from Oregon to Washington across the Columbia River

It is super important to take frequent breaks when road tripping while pregnant. Firstly, you will need to pee all.the.time. It comes on suddenly and becomes urgent quite quickly. Every opportunity you get, use the bathroom. It is also important as your pregnancy gets further and further that you get up every 2 hours or so to stretch your legs, as you are at a higher risk for blood clots. I used every gas station and bathroom break as an opportunity to take a quick walk.

Look at that view!

Although taking a road trip while pregnant involves some accommodations, it is still very much worth it!

Top Places To Visit in California

Oh, California. The Golden State, and my favorite state in the USA (tied with Washington because it’s home!) I’ve been enough times to count the trips on my two hands, and have seen many miles of the state. From theme parks to beaches and from the world’s largest trees to huge lakes, California really does […]

What To Do in Victoria, BC In 2 Days

Canada is a huge and diverse country. There is the island province of Newfoundland in the East, the Arctic territory of Nunavut up North, and mountainous regions dotting the West Coast. If you go all the way to the West, you will find the province of British Columbia. If you go to the Westernmost point […]