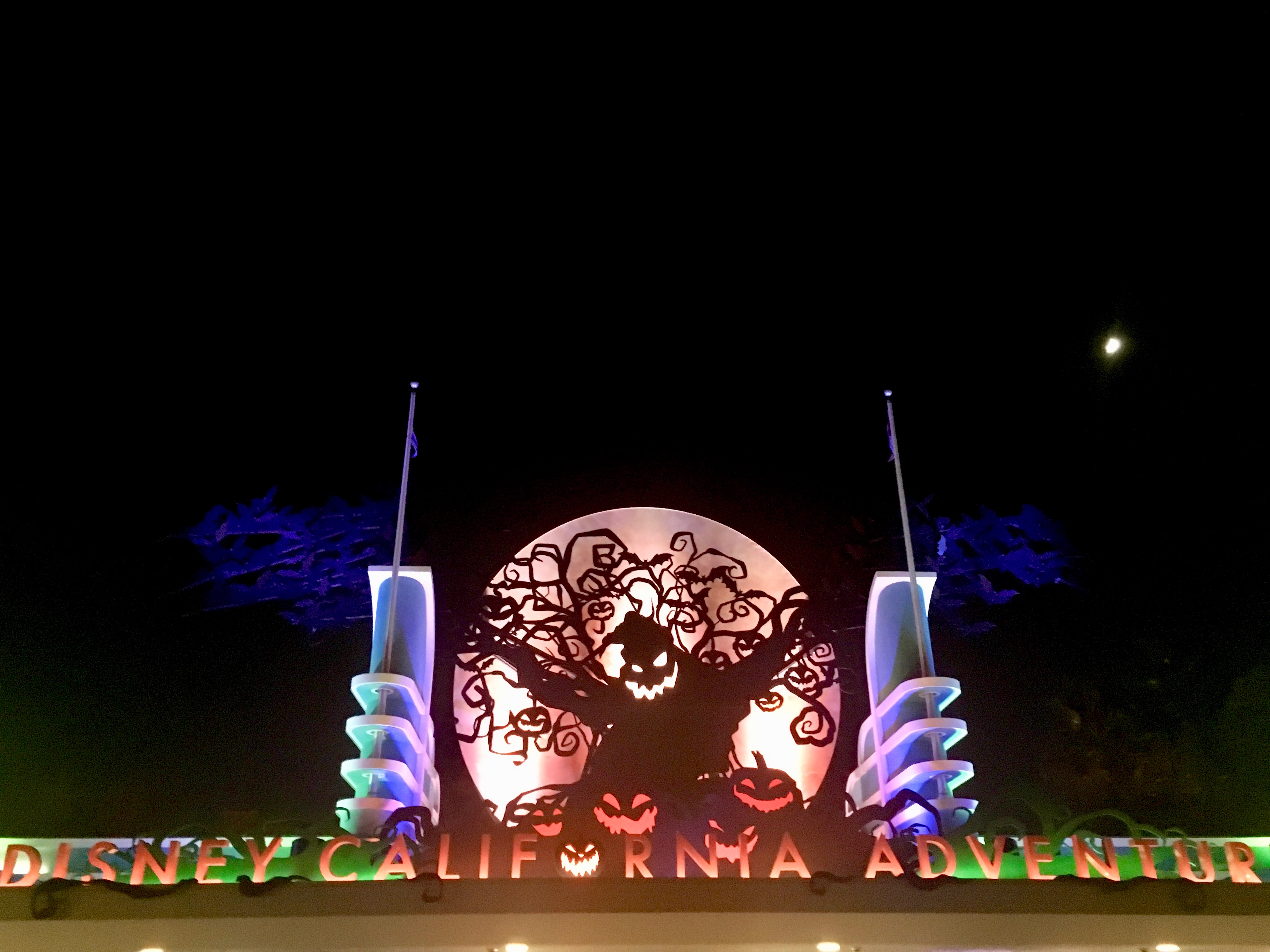 October is one of my favorite months of the year. For as long as I can remember, the 1st of October is a day in which I plan out the month ahead. As I have gotten older and started traveling more, I have been able to add “Visit Spooky Travel Destinations” to my list of traditions. The US West Coast is filled with fun places for children, towns for the entire family to enjoy, and some downright terrifying stops. Happy Halloween month!

The “Most Magical Place on Earth” goes all out for their Halloween celebration. From September 7th (they start even earlier than I do!) to October 31st they decorate the park, change up some rides, and even offer a special after-park-hours event.

The Pumpkin Statue is busy all day long, and to get a photo with it you will have to wait in line!

Last year I had a chance to visit! This coincided with the inaugural themed celebration at Disneyland’s sister park: California Adventure. Each park had its own fun touches. It is worth it to buy the Park Hopper ticket at this time of year, to access all of the Halloween fun in both parks. Children 3 and under are free, Ages 3-9 are $160.00 and adults will run you $167.00 per Park Hopper Pass.

Only have one day to visit Disneyland? Check out my post for the perfect tips!

In Disneyland, the Main Street becomes a Pumpkin Festival. The street is lined with jack-o-lanterns, and you practically walk right into a huge Mickey Pumpkin upon entry. Characters transform too! Last year I got to see both Minnie Mouse and Goofy in their spooky attire.

The Halloween fun starts right at the entrance!

The fun does not stop there, because certain rides offer themed experiences. Both Space Mountain and Haunted Mansion become even scarier rides.

*Note: As of 2019, this ride is now Star Wars themed Hyperspace.

Space Mountain Ghost Galaxy is predominantly for older children. Although it has a height requirement of only 40″, it is completely in the dark. FastPasses are available for the ride, and they are beneficial at this busier time of year. Haunted Mansion Holiday melds The Nightmare Before Christmas with the original, already scary ride. We did not get a chance to experience it, because Fast Passes ran out around 4 PM.

Goofy is all dressed up for Halloween!

California Adventure continues the Nightmare Before Christmas theme, with Oogie Boogie greeting you at the entrance. A Headless Horseman Statute awaits in the park. If you stick around long enough, you will see the cool effects added to the statue. The biggest change to the park is Cars Land. Luigi’s Honkin Haul-O-Ween and Mater’s Junkyard JamBOOree are perfect themed rides for younger kids. My favorite Halloween addition of the entire park was Guardians of the Galaxy: Monsters After Dark. Although I was very upset that Disney built the ride in what was previously Tower of Terror, this makes up for it. The lovable characters from the Marvel movie paired with the drop factor will leave you full of adrenaline!

Visiting California Adventure at night was a treat!

Monsters After Dark is officially one of my favorite rides at Disney!

If you grew up watching Disney Channel (Family Channel in Canada) in the late 90’s and early 2000’s, you have probably seen the movie “Halloweentown”. The story revolves around a teenage girl and her family, who find out they are witches from another realm.

My sister and I spent our childhood watching this movie, and its sequels, together!

Back in 1998, the movie was filmed in St. Helens, Oregon. Every year since, the town has put on a month long festival, transforming the town and hosting events. Whether you have seen the movie or not, there is something for everyone in the family.

Meet Benny, the skeleton cab driver from the movie!

Some of the activities include photo ops around the town, a haunted house that is accessible for both children and adults, and movie marathons. In 2018, I got to attend the 20th anniversary celebrity pumpkin lighting. The original cast were all present to light the pumpkin (minus Debbie Reynolds, who sadly passed away in 2016). To see the cast of a movie I watched year after year as a child was magical. To see so many people show up for this event was also magical.

Last year (2017) there was a small, unassuming memorial to Debbie Reynolds, who plays Grandma Aggie in the movie

The town itself has such charm, being located right on the Columbia River. It remains a small town with antique shops and an old-style movie theater. Best part? Touring around the town is free!

Visiting during the Celebrity Pumpkin lighting was such a cool experience, even for my husband who is not the hugest fan of the movies!

The story of the Winchester Mystery House is a unique one. Its owner, Sarah Winchester, lost both her husband and her daughter at a young age. She was convinced this was because their family had made their fortune in Winchester Repeating Arms. Their rifles amassed many casualties throughout the Civil War. Sarah spent almost 40 years constructing a mansion, non-stop. There are some pretty odd features: a staircase that leads nowhere, a door that opens from the 2nd floor to a drop down below, and a creepy seance room. It is said these designs were put in place to confuse spirits.

The house has been home to many paranormal sightings over the years. There are questionable pictures taken by employees, video surveillance footage, and many individual people who report their own experiences. While I have been there twice and have tried really hard to see something out of the ordinary, I have had no such luck.

*Note: There is no picture taking inside the house, so make sure you get a chance to take some around the grounds and in the beautiful garden!

I was desperately searching for some paranormal activity on this hot October day!

The house itself is beautiful, and any tour you take will leave you a little bit spooked. The standard Mansion Tour lasts just over an hour, and a guide leads you through the never-ending house.  In 2017 the Explore More tour began, and it takes you through newly opened rooms. Packaging both The Mansion Tour and the Explore More tour will cost you $54.00 if you buy online ahead of time. The regular tour is  $39.00/adult or $20.00 Ages 6-12. I took the extended tour, and I have to say that there is something infinitely creepier about it. On this tour you have to wear a hard hat due to the sensitive nature of this part of the house, and it is an Age 10+ tour due to safety concerns.

The house itself is so beautiful!

During Halloween time, there are added tours that occur at night. New for 2019 is a multi-sensory experience called Unhinged. This tour will cost you $44-54, and is not recommended for children under 13. In 2018 the seasonal night-time theme was “13th Door”, where you would tour through 13 spooky doors that all have a significance to the house. I can imagine that being in the dark makes the house seem much more scary.

The gardens in front of the house are well maintained, and give you a good excuse to walk around the house looking for ghosts!

You can find the mansion on many “ghost hunter” shows, so if you are a fan of those, chances are you have seen this house. Whether you believe in those sorts of things or not, the house is certainly an oddity. The architecture is beautiful, and the madness that drove Sarah Winchester to build and build and build is certainly intriguing.

Here you can see just how large the house is! Three floors were lost in The Great San Francisco Earthquake in 1906

Have you seen the movie Shutter Island? Alcatraz is just like that, except it is real! The only way to the island located off the coast of San Francisco is by boat, and the ride there is through the harsh and frigid waters of San Francisco Bay.

“The Rock” served as an isolated maximum prison from the 1930s to early 1960s. There were few attempted escapes and only one that was successful (although it is believed the inmates never made it to land.) While touring the island that is home to the prison you can visit the actual cells that are riddled with bullet holes and see spattered blood stains from The Battle of Alcatraz. You can look into the cell from which Frank Lee Morris made his great escape. And you can even head into a solitary confinement cell. The guards and their families lived on the island, and you can view these buildings as well.

Alcatraz is a part of U.S history, so it is much less gimmicky than the other destinations. You can visit during the evening for a night tour, but that is as spooky as it gets- unless of course you run into one of the many rumoured ghosts of the island!

The view from the top of the island!

While these are four of the spooky travel destinations I have been to during the month of October, there are many other creepy places to check out. Portland is known for celebrating Halloween all month long. In Seattle you can visit an actual historical morgue that has been turned into a haunted house! And my personal favorite? The Whaley House in San Diego. It holds the title of the “Most Haunted House in America” and has a tumultuous history. I have some unexplained pictures from my time there, and had an eerie feeling throughout my experience.

October is the perfect time to celebrate a bit of spooky in your life. Whether you are scared of these sorts of things, and prefer pumpkin patches and Disney movies (Hocus Pocus, anyone?) or love to be scared out of your mind at haunted houses, there is are spooky travel destinations for everyone!

51 Comments on “Spooky Travel Destinations Along the US West Coast”

Spring is a season of new beginnings! Although we may be close to home, that does not mean we need to spend all of our time indoors. Embark on a Signs of Spring adventure! If you have a backyard you can utilize that space for your wandering. If you live in an apartment, condo, or […]