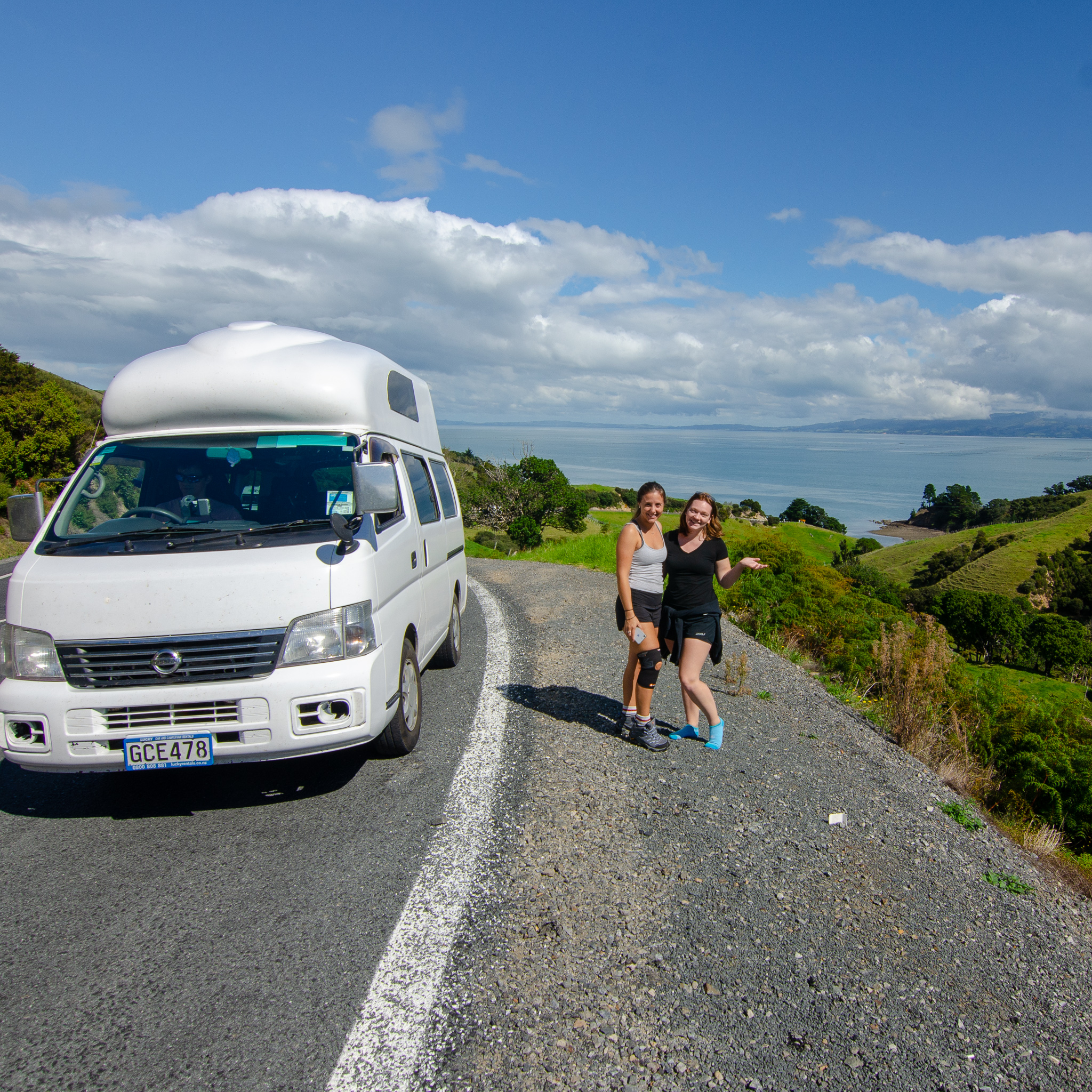 7,000 miles, that’s how far I was from home. We arrived late at night in Auckland on a plane from Brisbane, where we had just spent 5 glorious Aussie days with our friends Ryan & Alyssa.

Read about my adventures in Australia!

After a week spent in hot, sunny Australian weather, we awoke the next morning to rain. And went back to bed. We eventually convinced ourselves to pick up our camper van, and although that was a longer process than we had hoped, we were soon off on our first journey: to The Coromandel.

What was to come was two days filled with surprises, let downs, beauty and a little bit of chaos.

Prepare for any holiday closures

We started our journey with one simple problem: we needed food. The camper van provided us the freedom to make at least some of our meals. It was outfitted with a fridge, a stove top and utensils. We left town in search of a grocery store, hoping to stock up before heading out into a more rural area.

Views on the way to The Coromandel

In no time we came across a promising grocery store, and pulled up in an empty parking lot. That seemed unusual, because it was around lunch time. Upon a closer look at the store’s signs, it appeared it was closed. The reason for a supermarket being closed in the middle of the day? It happened to be Good Friday. McDonalds it was! As we ate our fast food we reasoned to ourselves there was no way that all grocery stores could be closed. It seems we were wrong. We spent the day eating fruits from small stores until we could find a restaurant for dinner.

Look at those blues and greens!

Plan according to holidays or happenings that may be taking place while you’re traveling. We knew it was Good Friday, but what we did not know was that during Easter weekend all the small towns essentially shut down. That entire long weekend we struggled to find food, as each town had a slightly different schedule of when they were open and closed.

Plan to stop frequently to admire the views

Around three hours was the projection Google gave us for getting from our hotel in Auckland to our first destination in The Coromandel. That was not the case at all.

Although some of the loss of time was due to the lack of speed our camper van had, it was mainly because we were blown away by the views. We hugged the coastline of the Firth of Thames on our way to Coromandel. It started with icy blue water and the greenest grass we had ever seen. The views then progressed into rolling hills, and viewpoints out into the distant water. It seemed like around every corner there was something even better, and we could not help but stop to take it all in. The problem? We had dinner reservations at a winery. It was clear by the time we got to New Chum Beach on The Coromandel that we would not be making those reservations.

We decided to take our time at New Chum Beach instead of rushing, and were rewarded with a fun hike to get there, a beautiful beach and an amazing overlook that we stumbled upon. Add a few hours to your projected travel time when you are heading to The Coromandel. There are so many unexpected places to see, and you don’t want to miss out on things you already have planned!

The early bird gets the worm

The next day we woke up later than we had expected. Our destinations for the day were the famous Cathedral Cove and Hot Water Beach. Parking was further than expected, and we needed a shuttle to take us to the trail head. That was sign number one that maybe this day would not go as planned.

The paved trail down to Cathedral Cove was packed with people. Another sign. But all this was nothing compared to the masses of people we saw as we exited the final stairs to the beach. It seemed as if the entire North Island was at the most famous cove in The Coromandel. We took some pictures past the photogenic white stone stack, and headed back onto the trail. The true gem came on the way back, with the discovery of of Stingray Beach. It seems as if everyone had bypassed this equally as beautiful area in favor of Cathedral Cove. We spent time on the quiet beach exploring caves and walking beside the white cliffs.

Next up was Hot Water Beach. Another famous beach in which, during the right conditions, you are able to dig your own “hot tub” in the sand. When we got there, it was even busier than Cathedral Cove. All the heated areas were already occupied. From our towels in the sand we watched others soak in their hot tubs. A bit of a let down, for what could have been such a unique experience.

Sometimes it pays to wake up early, especially when it is a busy long weekend. The crowds could have been avoided had we visited the tourist spots early in the day.

Have an adventurous spirit

The first few days did not go quite as planned. We missed our dinner at the winery, food was more of an issue than we would have liked, and some spots were not exactly what they looked like in the pictures we had seen. But it all turned out okay, because we kept a positive attitude.

With the turn of events we were able to find even better places than we had planned. We were able to take our time on the drive to The Coromandel and enjoy a restaurant dinner together after a long day of driving.

Our time in The Coromandel was short, but gave us our first taste of New Zealand’s North Island. We ended our second day at Fernland Spa, where we soaked in the thermal pools and finally had our camper van dinner (we like to call it parking lot pasta!)

New Zealand has such interesting trees and plants!

Next up was a geothermal island located a boat ride away, and Lake Taupo, where we would have a sailing adventure! Read about that adventure on our North Island New Zealand Road Trip!