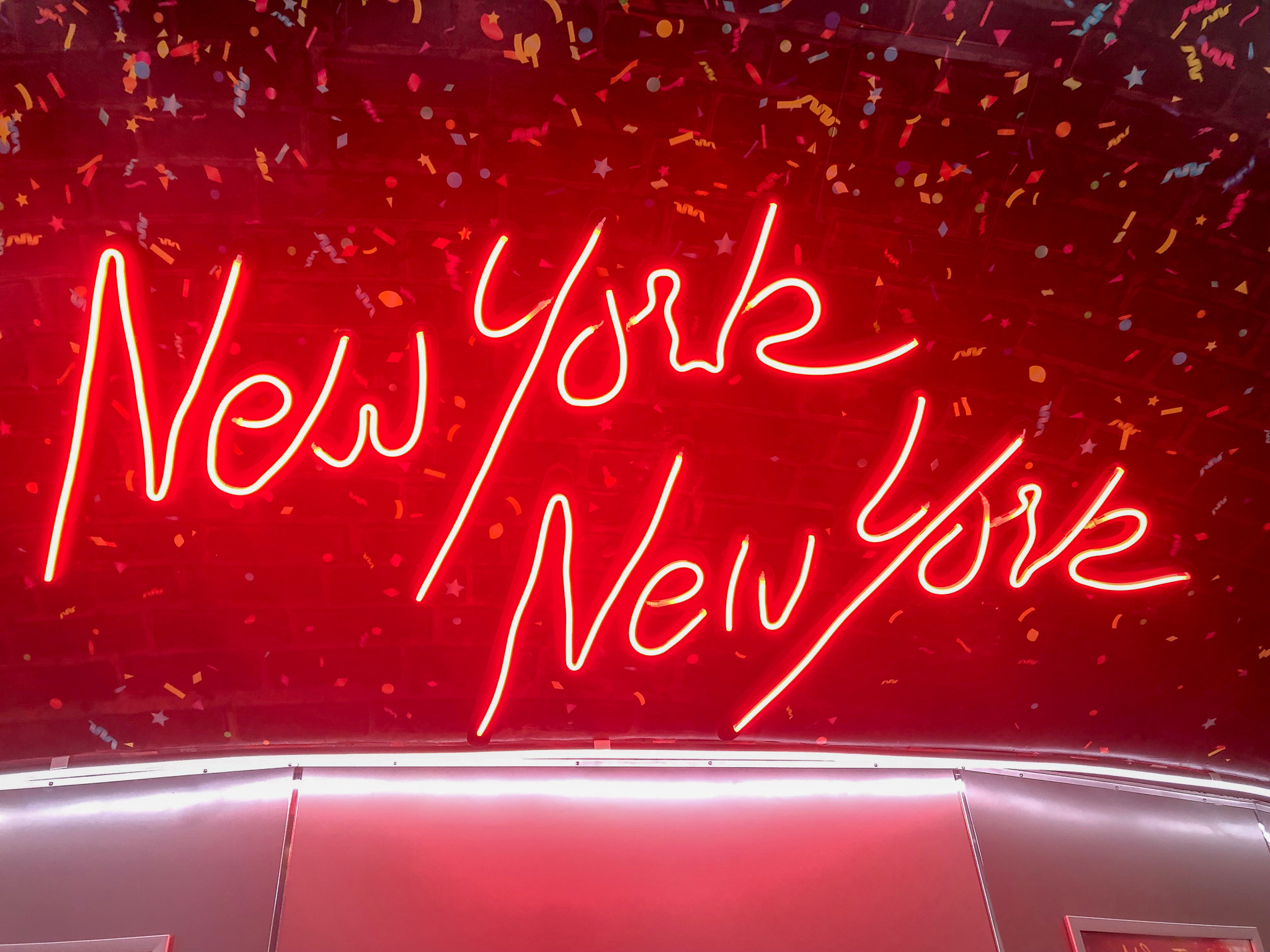 Traveling to a big city for the first time requires a lot of planning and a positive attitude. You cannot just land in a new city without a plan(or maybe you can, and if so, kudos to you! I want to be more like you!). Even when you meticulously plan things can still go awry.

Now imagine the first city you visit on your own being one of the biggest in the world! That’s exactly what my sister did, becoming a full fledged adult traveler earlier this year. She spent a week in New York City (including 28 hours travel time – 16 there and 12 back from Toronto) with her best friend, exploring world-famous attractions and Instagram-worthy locations.

Exploring a huge city on her own was liberating, and it brought her and her best friend closer than she ever imagined (also literally closer- because the hotel in Manhattan was so small it kept them in tight quarters at all times)! Her truthful travel tips for visiting New York City are helpful for navigating the huge city, and will minimize your mishaps!

Do not have anything big planned for the first day

New York took us months of planning. We had multiple colour coded charts, bought tickets for things in advance, and had every event planned down to the hour. Unfortunately, Megabus breakdowns don’t care about your colour coded charts. Our 12 hour bus ride from Toronto to New York quickly became 16 hours when our bus broke down in Syracuse.

We could hear people around us scrambling and making phone calls to cancel reservations or to book alternate transportation. They had things planned that they hadn’t thought they would miss. Luckily, we had thought ahead and didn’t have anything big scheduled for that day. Although the 4 hour delay was exhausting and frustrating, it was manageable.

Even with our delay, we made it to Times Square! Tip #1 for visiting New York City? Go with the flow!

Even if you are not taking a bus, life happens. Flights can be cancelled, mistakes in scheduling can happen and  sometimes things take place that we can’t plan for.

Samantha’s Note: This has happened to me. I missed my train in Italy, had a hiking tour cancelled in New Zealand and have overplanned one too many times to count.

Be prepared for your first day to be a little wonky and just go with the flow!

Get an Explorer Pass

Explorer Passes will help a first-timer see New York’s famous attractions of interest. This was one of the best purchases we made for the trip. You can choose anywhere from 3-10 attractions out of 90 possibilities (!) and pay accordingly. Our Explorer Pass cost us one flat fee of around $125 CAD and allowed us to use it at 4 New York City attractions.

With the pass we just showed up and got to skip lines rather than waiting to buy the tickets in a long line. This can save you hours in a huge tourist city like NYC!

It also meant we weren’t tied down to specific places. There was more choice in what we could do. The 4 we chose were: Madame Tussauds, the Empire State Building, Radio City Music Hall Tour, and the Museum of Modern Art.

Each attraction on its own would have been around $35-40 CAD so we did save some money with the pass! We saved a lot of time and frustration by bypassing lines and not having to avoid peak times at the most famous attractions!

Museum Of Modern Art was one of the attractions on our Explorer Pass!

A Metro Card during your time in New York City is an invaluable resource that will take you almost anywhere. During our whole trip to New York City we swiped our Metro Cards too many times to count. The card cost us $32 USD, which may seem steep up front, but it was absolutely well worth our money.

New York City is not a driver-friendly city, and the most convenient and easy way to get around is using their subway and bus system. We probably took the subway 10-20 times daily to get from place to place. Although we planned similarly located events near each other for the day, there was still so much commuting we had to do. New York is a huge city!

Our Metro pass took us everywhere, including Central Station!

We did the math at the end of our trip, and if we had just paid the individual fare each time we took the subway, it would have cost us hundreds of dollars. Taxis would have been even more.

With our cards we didn’t have to worry about carrying around enough change. If we got lost it was okay because we could just turn back and swipe the cards again and again.

Frozen Live at St. James Theatre! We were able to get here by using the Metro!

Honestly, the trip and all the fun we had would not have been possible if not for our Metro Cards!

Make sure you have a plan for navigation

Do you know how to navigate using a paper map? You’re probably like us and have no idea what to do with an actual map.

Google Maps was our saviour. We both paid a small additional fee on our regular phone plans to be able to use our data outside of Canada and it made all the difference in the world. (*Note: If you live anywhere within the US- continental and Hawaii, your phone plan will work! For countries outside of Canada you will need to check with your own provider! Another option is to purchase a SIM card when you arrive in the US).

We were both able to navigate in real time with Google Maps and only got lost only a few times. Although we could have used Google Maps before we left and planned our route beforehand, having Internet on the go made things so much easier. If a map closed, we could just restart it. If we took a wrong turn, we could get a new updated route.

Having constant navigation in a new, big city can be a game changer. It is worth it in time and your happiness to be able to figure out where you are at all times!

*Note: Be sure to check if your hotel offers WIFI beforehand. Our hotel did not, and if we had not purchased the data plan beforehand we would not have even been able to navigate to plan our days!

This seems like common sense, but the amount of walking you have to do in New York is insane. Even if you take the subway, most routes only get you so far. There is still usually a walk to your destination. If you have an activity tracker, you can keep track of all the walking done in a day. We didn’t do this but we should have, because it was probably in the tens of thousands.

I did wear flat shoes, but by the end of the trip my ankles were cut up from all of my blisters. I wanted to look cute in all of my tourist pictures so I wore my cute boots but I’ve learned it’s easier to just crop your feet out of the photos. If you must have cute shoes in your photos, think about carrying them to your location. It will save you a lot of pain!

I was able to still take cute pictures at the Museum of Modern Art, even with cropping my feet!

Another one of my tips for visiting New York City? You may want to make sure you also wear shoes that are easy to clean, and maybe even waterproof. New York City is a city, and cities unfortunately can have unexpected puddles of pee. We avoided near accidents multiple times!

Cute shoes are always a nice accessory, but comfort, reliability and cleanable fabrics rule when you’re spending day after day on your feet!

The Bagel Store (check it out: no feet pictured!)

Enjoy how big the city is!

New York City is a huge place, full of so many great sights. There are so many attractions that you will probably make a list of things you want to see on a return trip.

For the most part the biggest attractions are close enough to each other that commuting isn’t too difficult.  One of our tips for visiting New York City? Just because something is located in New York, doesn’t mean it’s close. We made this mistake on the day we went to Brooklyn. We figured since we were going to the Brooklyn Bridge we should also check out a rainbow bagel place recommended to us. It was also in Brooklyn, so how far could it be?

We finally got our rainbow bagels, after a long day of walking

Little did we know, it was a 40 minute subway ride and then a walk from the bridge. It took spending an obscene amount of time looking for the J train, accidentally stepping in a pee soaked elevator, losing all feeling in my toes, and my best friend yelling at me because she needed to pee, to finally get our rainbow bagel. Next time, we’ll make sure not to assume that just because they’re in the same neighbourhood that they’re close by (or easy to get to).

New York City is an expansive city, but that just makes you want to return again and again. Just remember to keep this in mind while planning!

New York City was the best first trip we could have had. Every moment was special and unique. Even the challenges we faced taught us something about patience, travel, and friendship. They also taught us great tips for visiting New York City

Sometimes things go wrong, but at the end of the day travel is not about if you followed your plan completely. It’s about trying new things, seeing new places, and enjoying some time away from all the craziness of everyday life.

When we stepped out the door and went over our packing list one last time, we had no idea what was in store for our first road trip with our toddler, our two dogs and our new rooftop tent. Our unique Oregon & California coastal adventure will always be a trip to remember, and we […]

Hiking with a Baby/Toddler: Advice from 30 Hikes With Noel

It’s hard to believe my little one is a year and a half old!! Noel has brought so much happiness to so many lives, and we are lucky parents. He is curious, adaptable, playful and so much more. One of our greatest accomplishments as a family has been spending a lot of our time hiking […]

We use cookies to ensure that we give you the best experience on our website. If you continue to use this site we will assume that you are happy with it.AcceptRejectRead more
You can revoke your consent any time using the Revoke consent button.Revoke Cookies