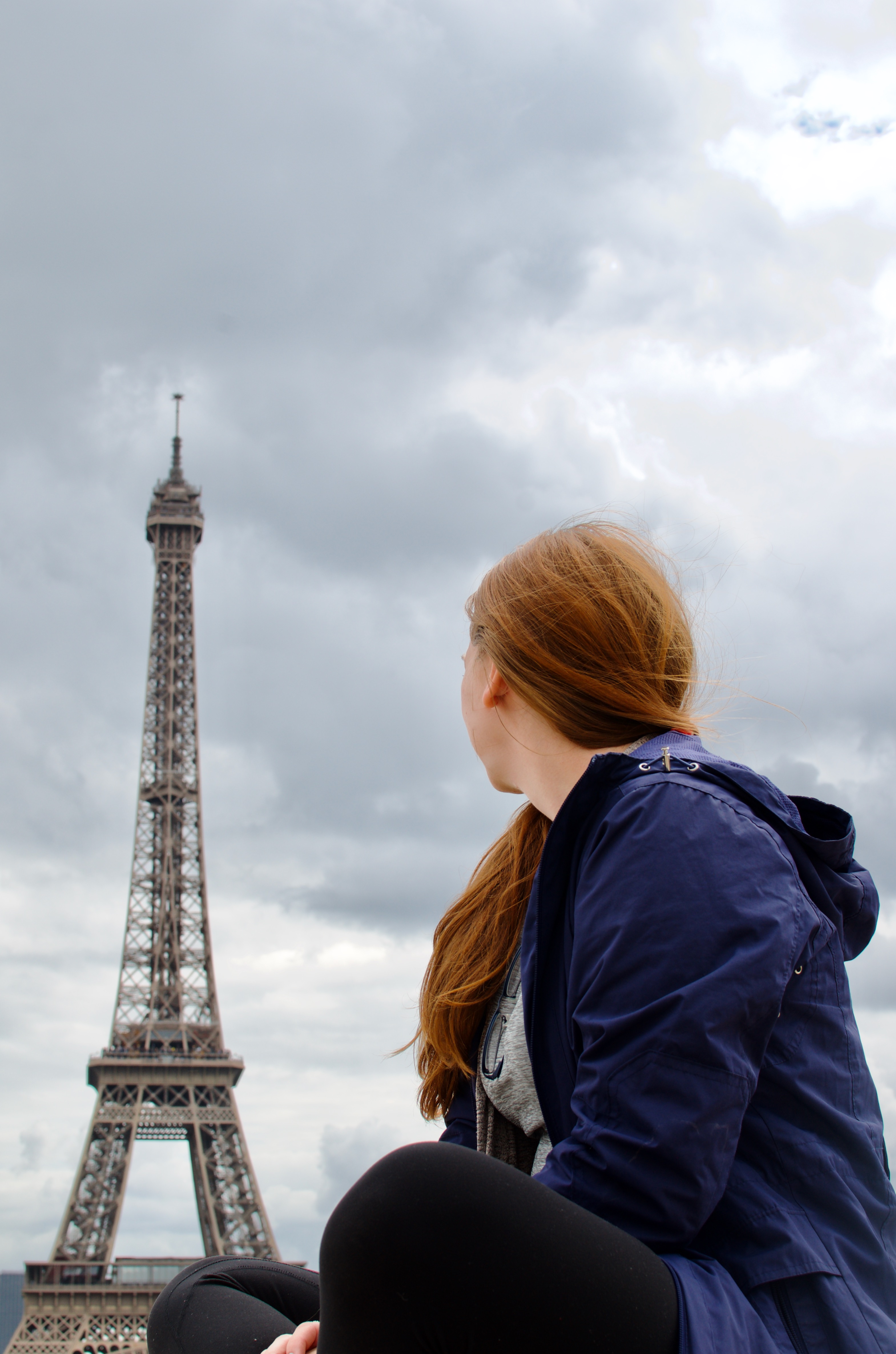 “Paris is always a good idea” is an expression I have heard many times and thought of as cliché. Is it really that amazing, or is it just a place everyone wants to love? After missing an opportunity to visit as an end-of-highschool trip (I went to Greece for a month instead…no regrets there) I figured I would eventually get around to it, but there was no rush.

Boy oh boy was I pleasantly surprised by the City of Light. After a rocky start, we had the most amazing three days. We had some potential disasters, and made some bad decisions, but I can now confirm that yes, Paris is always, always, always a good idea.

For a recap of this trip, visit a detailed itinerary of Highlights of Paris in 48 Hours!

Of course we had to write Just Married on our lock!

Train tickets do not book themselves

Winding down our disastrous time in London (see previous post here for all the unlucky things that happened) we had to catch a high-speed train to get to Paris. It is a relatively quick train, a fairly painless endeavour, and still cheaper than flying. All of the above is true if you have train tickets! Somewhere between intense wedding planning, working full-time and mapping out a honeymoon we forgot the detail of buying our train tickets from London to Paris. We only realized this the day we were set to leave London. If I am being completely honest it was only a few hours before we wanted to depart.

We found some WIFI, and panicked at the thought that we had a tour the next morning IN PARIS, and we might not be there. We soon realized we would be paying way more for the tickets than we had originally budgeted for. WAY MORE. We looked at flights which were now almost comparable in price, but ended up deciding that we would still take the train. Once we had forked over a large amount of money and purchased the tickets, it was smooth sailing.

By some miracle that night we actually made it to Paris, and our mistake soon became a distant memory. Trains, planes, and automobiles will not book themselves on a vacation. While it is much more fun to book tours and attractions, your transportation is what will get you to these places. Book it while you book tours, book it unreasonably early, it doesn’t matter. Just make sure you book it so you do not end up scrambling at the last moment like we did.

Our first day in Paris was an absolutely wonderful whirlwind. In the morning we woke up bright and early on a Sunday, before the city was awake, to visit Versailles. This place is the picture perfect example of opulence and excessiveness and every single detail is beautiful. After returning to the city centre we climbed the Eiffel Tower and took in the city views. When all was said and done, we had walked around 20,000 steps.

Look at all that gold leaf on Chateau Versailles

This chateau has amazing history! Here is a quick overview provided by the Versailles website

One of the many fountains in the garden grounds: Latona’s Fountain

Our Airbnb was a far walk, and we had learned our lesson about taking cabs in London. We decided to find a sightseeing bus and ride it back to the stop closest to us. We were not ready for the ride that was about to take place.

The Tour de France was happening that day, and while we realized that would mean a bit of a detour what ensued was the slowest bus ride ever. We had unplanned stops every few minutes where our bus stayed stationary for minutes at a time. You are probably thinking that sucks but at least we had something cool to listen to on our headsets. Hah. Every time the bus stopped the headsets played us some music. Oh, did I say some music? I meant basically one song. At one point it played a verse and the chorus of Edith Piaf’s “La Foule” over and over again until I thought I was going to go crazy. I heard the song months later in a bakery in Seattle and could still sing along.

Just as we were discussing getting off the bus our mind was made up for us when our bus kicked all its passengers off at a stop. We took that a sign and headed home. An extra few thousand steps would have been so worth it in comparison to the hour we spent going nowhere fast. Walking is almost always the better option. That is a lesson we learned and relearned many, many times throughout our trip.

The next day, in between visiting Notre Dame and The Louvre, we stopped for lunch. With many options, I decided to fully embrace the French culture and order a cheese plate. Some types I had heard of, some not at all. As many others I love cheese and was excited to finally taste the real, authentic French kinds.

I got myself into a situation I could not have anticipated. It was a pretty plate full of cheese when it came and I chose the least strong looking one to ease myself into the experience. I decided upon the first taste that I was not a huge fan. No worries! There were four others to try. I was trying to hide my disappointment as I nibbled on one cheese after another. Even the blue cheese, which was the one I was very familiar with, was so strong I could barely gulp it down.

All of the strong cheese (featuring some meat in the middle)

After my husband noticed that I was taking very small and cautious bites, he assured me I did not have to eat it and that he would help me. I switched to eating his food and he took some of my cheese. The look on his face as he took his first bite reflected what mine had probably looked like. Somewhere between confusion and horror.

Neither of us could finish the plate, and I ended up taking the remainder wrapped up in a napkin for fear of embarrassing myself as a silly tourist who could not handle strong French cheese. French cheese is intense! Any time we had a chance to eat cheese on the rest of our adventures in France, we stuck to Swiss cheese for its very mild taste.

Everything about Paris is perfect, as long as you speak French

Aside from our funny little mishaps (and one large one which almost prevented us from getting there!) Paris was a dream compared to our nightmarish experience in London. Not only were we able to take in many major sights, we had some awesome tour guides.

I somehow booked us on a small-group tour of the Louvre ( I still have no idea how I did that). We toured around with a guide who had grown up exploring the museum. It was by far the best tour I have ever been a part of. The guide had no issues navigating through the crazy crowds and always seemed to make room for us up front and centre of all paintings and exhibits.

My favorite piece in The Louvre

There was also amazing food. We stumbled upon a boulangerie that opened in 1730 (the oldest in Paris!) We discovered an amazing pastry called a millefeuille and ate way too many. There were also other bakeries with top notch desserts and restaurants with French meals I actually enjoyed.

A link to their Instagram page because who doesn’t love pictures of pastries?

Yet when we asked various other people we met later on our trip what they thought of Paris, they were not huge fans. We realized through talking to them that speaking the language really makes for a different experience. I speak French (thanks university for teaching me one valuable life skill!) and so we were able to communicate with the people in their preferred language. Apparently that makes a world of a difference.

Our time in Paris was short but filled with great memories. I cannot wait to find an excuse to return. It was a city that made me realize that although an experience can be so overwhelmingly beautiful, there are still imperfect things that happen. You can almost miss out on the whole experience, you can get stuck on a bus that goes nowhere, and you can order food you are not prepared for. There is always something that is going to happen, which makes it all magical, truthful travel.

11 Comments on “Truthful Travel Europe Series: Paris, I Louvre You”

Top Places To Visit in California

Oh, California. The Golden State, and my favorite state in the USA (tied with Washington because it’s home!) I’ve been enough times to count the trips on my two hands, and have seen many miles of the state. From theme parks to beaches and from the world’s largest trees to huge lakes, California really does […]

What To Do in Victoria, BC In 2 Days

Canada is a huge and diverse country. There is the island province of Newfoundland in the East, the Arctic territory of Nunavut up North, and mountainous regions dotting the West Coast. If you go all the way to the West, you will find the province of British Columbia. If you go to the Westernmost point […]